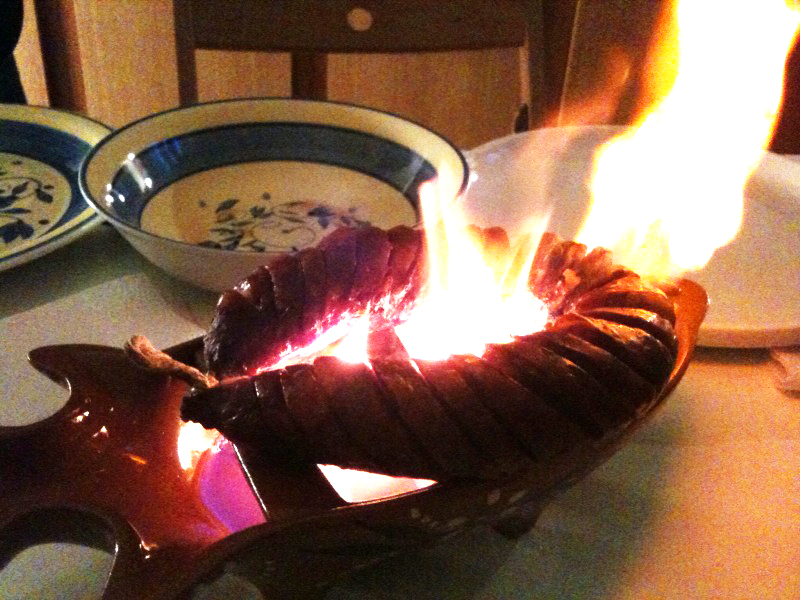 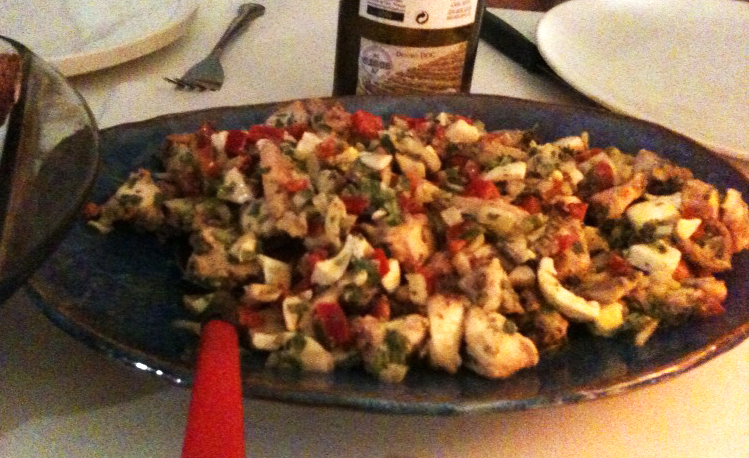 I always look forward to dinner at my friend M.’s.  She is a fantastic cook who happens to be Portuguese, and I come to expect Portuguese feasts whenever she has people over.  She often makes a version of bacalhau dish that is always excellent and a rare treat since we don’t get to enjoy this dish outside her house very often.  Bacalhau is a Portuguese version of salted cod fish dish and it is known by many different names, as it became part of the cuisine of many European nations. For example, it is known as bacalao (Spanish), bakaiļao (Basque), bacallà (Catalan), morue (French), baccalà (Italian), klippfisk/clipfish (Scandinavian), saltfiskur (Icelandic), bakalar (Croatian), and Saltfish (Caribbean). Each country and as a matter of fact each individual have their own special way of making this salt cod dish, and I came to appreciate the rustic simplicity of Portuguese way.

M. also makes bacalhau in a very similar way as Italian baccalà with heavy cream.  But last night, she made a version that showcases the excellent Portuguese olive oil.  To prepare any salt cod dish, you begin the same way; soak the fish in cold water for at least 24 hours in the refrigerator with several changes of water.  This softens the  fish and removes excessive salt.  For this version, the fish is cooked in white wine, and then layered on top of boiled and sliced potatoes in a casserole dish.  Sauteed onion (of course in olive oil) is layered on top of the fish and then another layer of potatoes.  The finishing touches are hard boiled sliced eggs, black olives and generous drizzle of olive oil.  The casserole is then baked in 375 degree oven for about 30 minutes.  M. served it with a simple arugula salad with cherry tomatoes.  In Portugal, bacalhau is usually accompanied by vihno tinto (red wine), but we brought some bottles of vihno verde since we love this refreshing, effervescent wine.

Bacalhau was not the only Portuguese delicacy we enjoyed last night.  As an appetizer, two different chouriços (Portuguese version of chorizo) were served interestingly enough set on fire on a pig shaped boat.  We also had an amazing octopus salad with boiled eggs, onions and red pepper.

Finally, the evening meal was gloriously finished with a mixed berry (strawberry, raspberry and blueberry) cobbler made by M’s friend and neighbor C. , who called this her razzleberry cobbler.  The cobbler was tart and sweet, and the crust (biscuit crust) nutty and flavorful.  An excellent ending to a fabulous feast.

This entry was posted in Recipes and tagged desert, fish, octopus, raspberry, sausage. Bookmark the permalink.