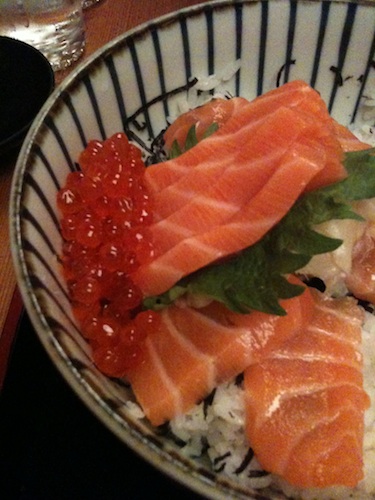 We went to see Bloody Bloody Andrew Jackson at Public Theater last night despite the miserable weather.  I am going to post a full review of the play soon, but for now, I have to say the musical was one of the most interesting musicals that I have seen in a while.  It was also interesting that there were so many more young people in the audience compared to your usual off-Broadway shows proving that you can draw younger people into the theater if the show appeals to them.  The show lasts 90 minutes without intermission, so we were out of the theater by 8:45 (on Tuesdays, the show starts at 7).

As usual, our preferred eatery around Public Theater neighborhood, Ippudo was packed (1 hour – 1 1/2 hour wait on a rainy Tuesday night!!).  As usual, we headed to our alternate favorite restaurant, Sobaya on 9th Street.  Ben had Nabeyaki Udon ($18, perfect for rainy cold night), and I had Sake Oyakodon ($16 and comes with a small dish of pickles and a small bowl of hot soup (very smoky) with inoki and shitake mushroom).  Nabeyaki Udon was topped with a barely cooked egg and some tempura.  The noodle was chewy and al dente (as how it should be!), and the broth exemplary: smoky, briny and clean.  I love the name oyakodon, literally meaning mother-daughter don.  (Don just means any rice dish in a bowl that is topped with savory things, usually protein).  It can be many things, but in this case it was the salmon and salmon roe sashimi combo.  The rice was still slightly warm, and topped with slivers of nori and very thinly sliced salmon fanned out on top.  On top of this were some thicker pieces of salmon on a shishio leaf and a small mound of salmon roe.  The fish was velvety and very fresh, and I appreciated the contrasting texture provided by differently sliced salmon (very thoughtful).  Salmon roe was not too salty (usually an indication of cheaper specimen), and each bite a burst of the taste of pure sea.  Also important was the quality of the rice: properly cooked and seasoned.  I can usually judge the quality of a Japanese restaurant by the quality of their rice and tea, and Sobaya did not disappoint.

This entry was posted in Restaurants and tagged salmon, sushi, udon. Bookmark the permalink.