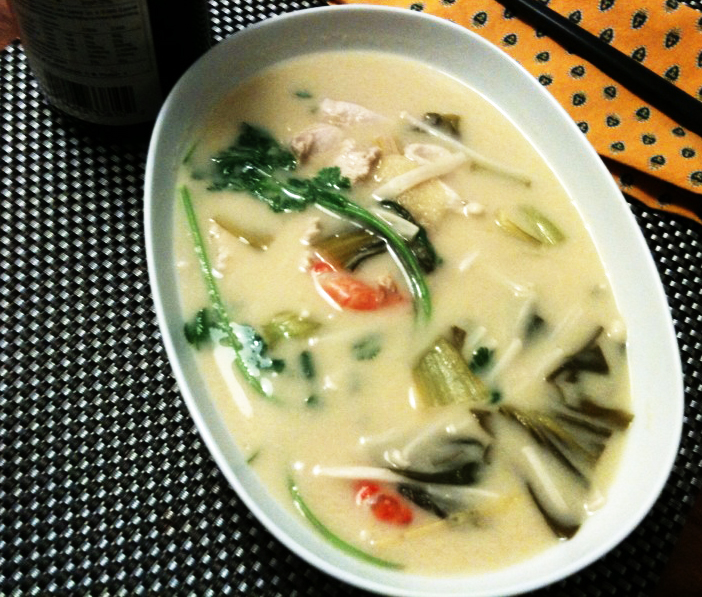 Ben got sick again. 🙁  He was hoarse and completely congested and miserable, and he had no appetite and was bored with your normal chicken soup.  I decided to be adventurous and make Tom Kha Gai (Thai chicken coconut soup).  It turned out to be surprisingly easy and delicious and curative all at the same time.  I read a few Tom Kha Gai recipes, and found out that Kha in the name denotes galangal and Gai chicken.  This soup utilizes the basic essential ingredients of Thai food, and turns out to be an excellent introduction to Thai cooking.  The ingredients are:

I went to WholeFoods and Garden of Eden to look for these ingredients, but I could only find lemongrass and lime.  So I once again searched internet for appropriate substitutes and found out that galangal can be substituted with ginger and a bit of lemon, and instead of Bird’s eye chilies, I bought a mixture of small Mexican green and red chilies.  Thankfully I already had a bottle of nam pla and a can of coconut milk on hand.  I simply had to give up on Kaffir lime leaf, and I was not exactly sure what flavor would be missing since I have never used this before.

The soup itself is very simple.  The soup base is made by combining chicken stock (14 oz.), galangal (2″ long; same amount of ginger with a splash of lemon), 2 chilies slice, sugar (1 tbs), lemongrass (2 stalks, white parts only), nam pla (4 tbs) and lime juice (from 4 limes) in a pot and boiling.  Once the liquid is boiling (taste and adjust seasoning, more lime, more nam pla, etc), thinly sliced chicken and coconut milk (1 can) are added and cooked for about 2 minutes, and the soup is finished.  Of course, I vary the recipe a bit and added a few shrimps, mushroom and bok choy.  The soup is finished with some cilantro.  It was surprisingly similar to Tom Kha Gai that I have had in Thai restaurants, and it really helped Ben’s sinus.