A Foodie’s Dilemma: To Eat or Not to Eat a Bug 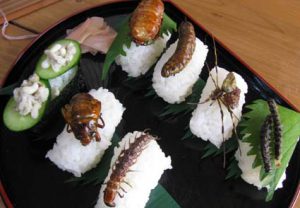 Bug sushi, anyone? Sushi, aka cold dead fish with rice used to be the yuck food 20 years ago. Can bugs be next sushi?

I have been thinking about what I eat in relation to not only pleasure and health but also the health of the planet.  As a self-confessed foodie, restricting what you eat is an absolute anathema (“I can’t be a vegan!”), but I do feel the responsibility as a global citizen to do something as more and more scientists are sending alarms about meat-centric Western diet as ecologically non-sustainable.  Recently British newspaper Guardian reported that United Nations Environment Program urged global move toward meat and dairy-free diet. The growing prosperity in large developing nations such as India and China will inevitably increase the demand for animal protein as they start to eat more like us, straining already limited agricultural resources. Extreme locavorism, currently vogue in some circles, is not going to solve this global problem.

A New Yorker (August 15th issue) article “Grub: Eating bugs to save the planet, (by Dana Goodyear)”  which discusses entomophagy (fancy word for eating insects, very New Yorker) in many different aspects, also made me think about some fundamental dilemmas faced by a foodies, who by definition is a omnivorous gourmand detesting any restrictions getting in their way of pleasure. Hence the usual conundrum: how does one balance the pleasure and ethics (or some would say guilt)? 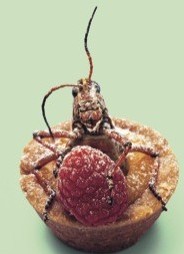 The New Yorker article points out that insects are economical and ecological alternative protein source only if the cultural hang-ups about eating bugs can be overcome.  According to Goodyear, “[f]rom an ecological perspective, insects have a lot to recommend them. They are renowned for their small “foodprint”; being cold-blooded, they are about four times as efficient at converting feed to meat as are cattle, which waste energy keeping themselves warm. Ounce for ounce, many have the same amount of protein as beef—fried grasshoppers have three times as much—and are rich in micronutrients like iron and zinc. Genetically, they are so distant from humans that there is little likelihood of diseases jumping species, as swine flu did. They are natural recyclers, capable of eating old cardboard, manure, and by-products from food manufacturing. And insect husbandry is humane: bugs like teeming, and thrive in filthy, crowded conditions.”  The very qualities that make bugs so hard to get rid of make them an environmentally friendly food. It also takes far less water to raise a third of a pound (150 g) of grasshoppers than the staggering 869 gal. (3,290 L) needed to produce the same amount of beef.  Yet one of the practical difficulties in popularizing entomophagy is the size of the bugs. Due to their unique morphology, processing insects is labor-intensive, and they are not exactly filling. Unlike some tropical super bugs, most insects in temperate regions of the world are tiny and one needs to eat about a thousand grasshoppers to equal the amount of protein in a twelve-ounce steak. 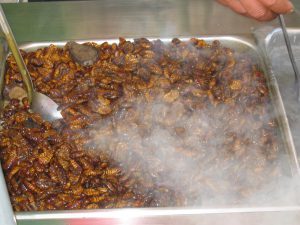 There also is a long tradition of entomophagy in many non-Western cultures. As a child growing up in Korea, I enjoyed snacking on soy sauce seasoned boiled silkworm pupae (Beondegi, 번데기), which still remains popular in Korea and often sold by street vendors as well as in cans in grocery stores. I remember vaguely nutty and mild flavor. But I doubt that I will be willingly eating the same snack again now that my thoroughly Western education (including nightmarish vision of Kafka‘s Metamorphosis) have instilled an incurable case of entomophobia. But after reading this New Yorker article, and becoming even more aware of the hypocrisy of food culture, I am going to try harder to make better choices for me and the planet.  I will limit eating animal protein for special occasions, and buying more organic and local food. But I understand that my individual effort is a privileged position from an educated urbanite: we need more political and social pressure to make it easier and cheaper to eat more variety of healthier food and to find a way to produce enough foods without resorting to pesticides.

This entry was posted in Opinion and tagged ecology, entomophagy, insects, vegetarian. Bookmark the permalink.