Mike Kelley at PS1 MoMA and Isa Genzken at MoMa 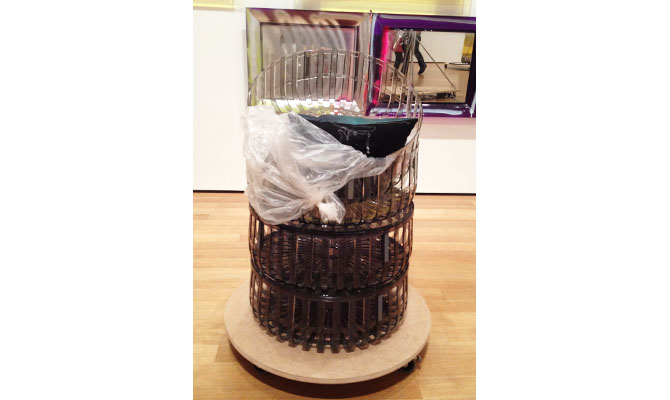 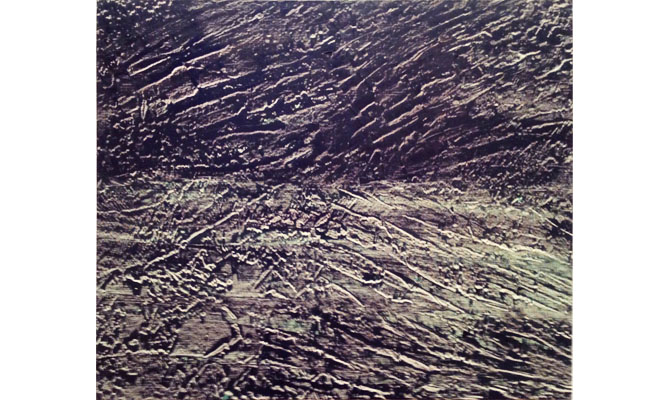 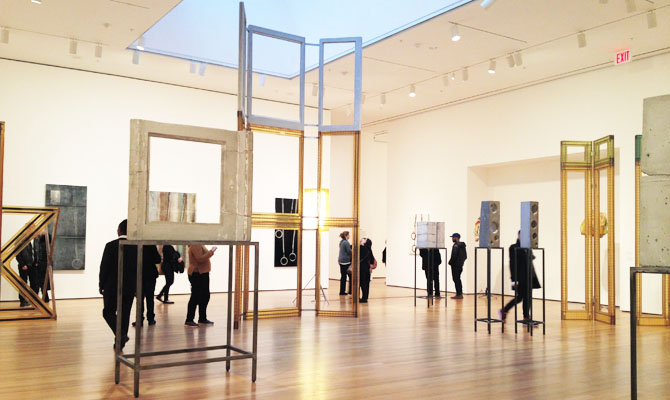 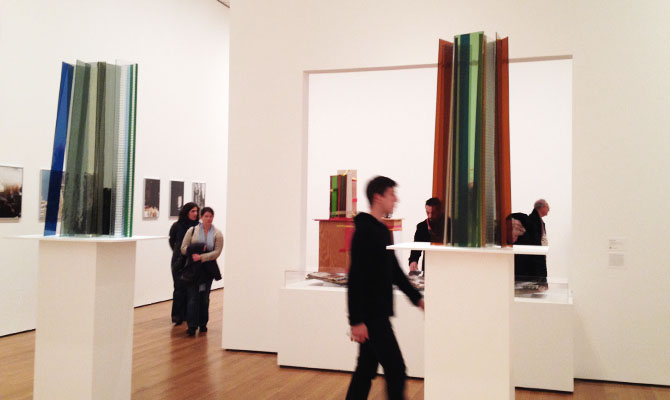 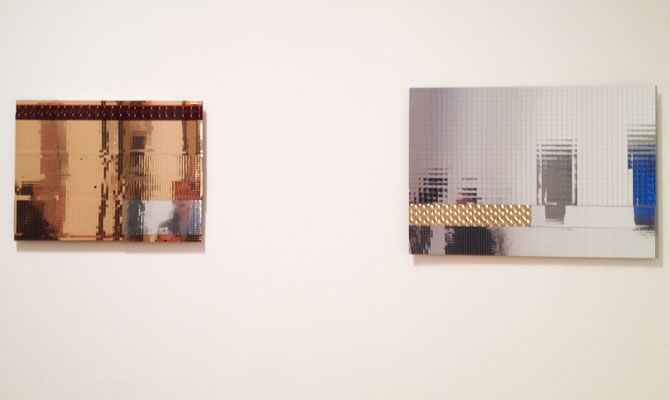 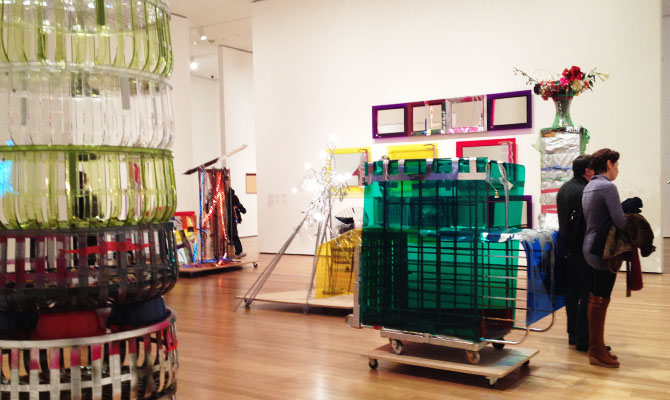 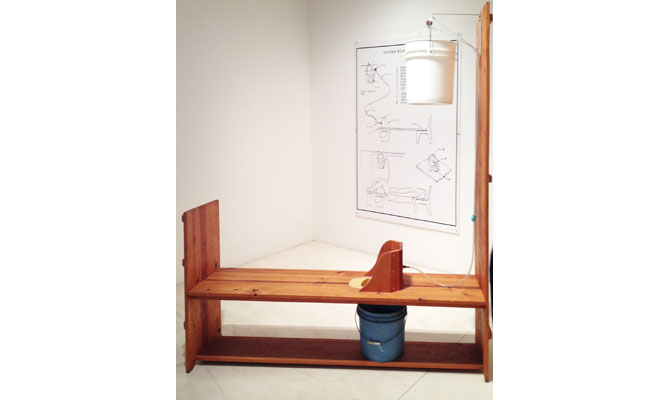 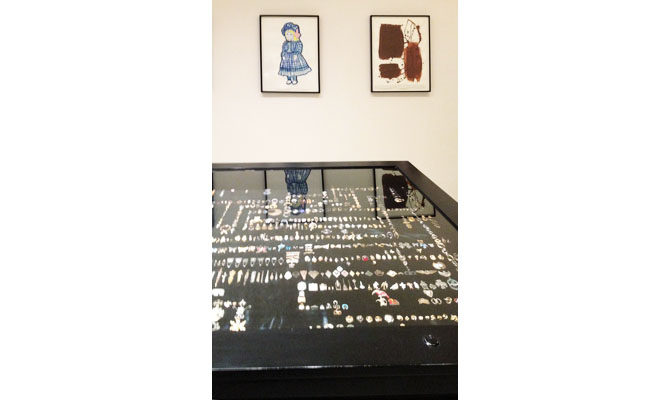 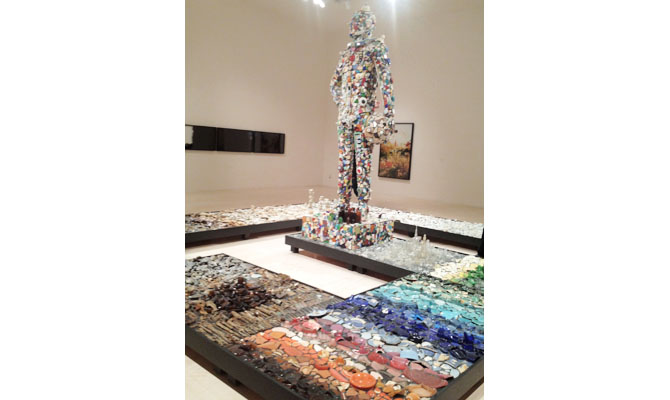 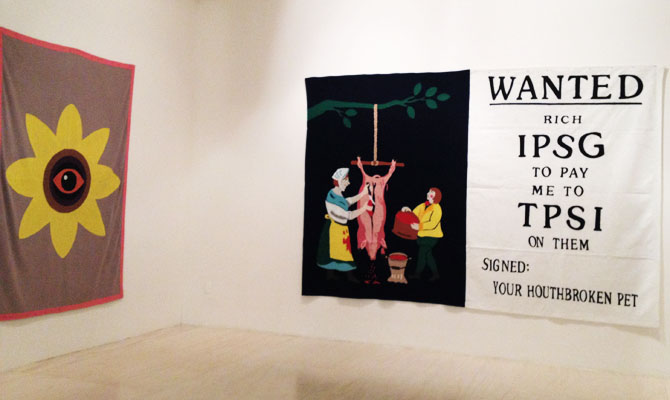 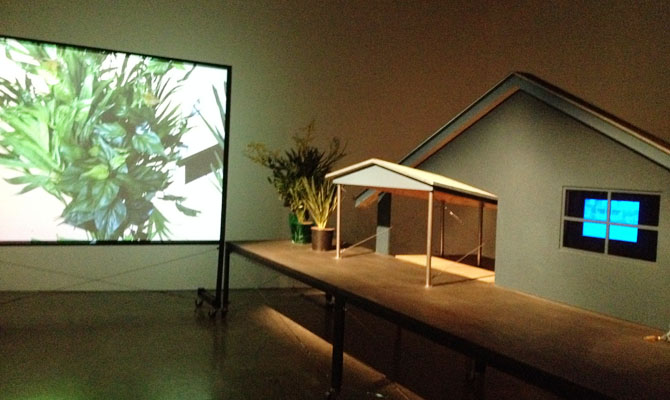 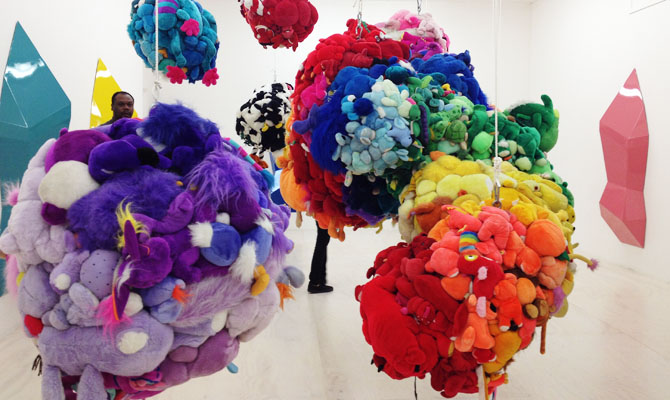 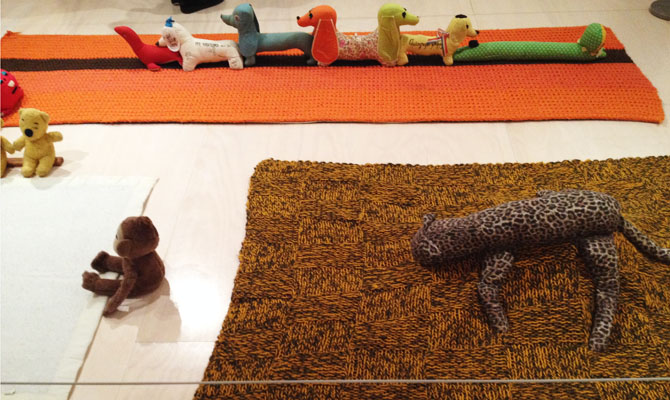 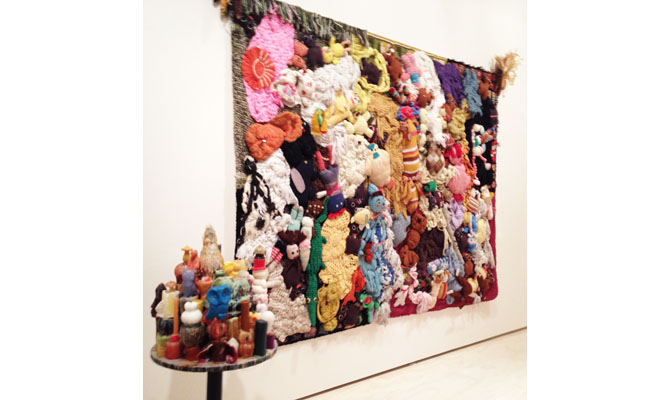 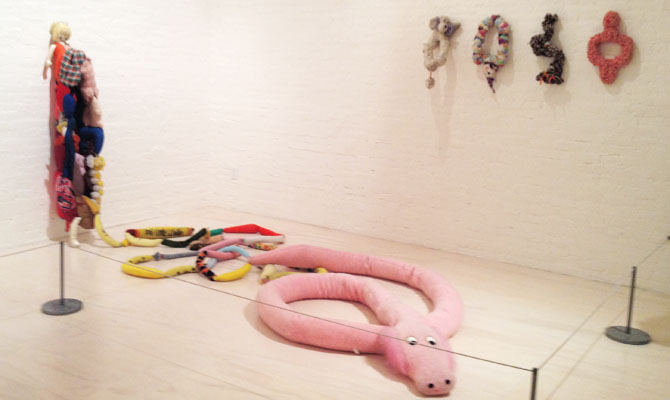 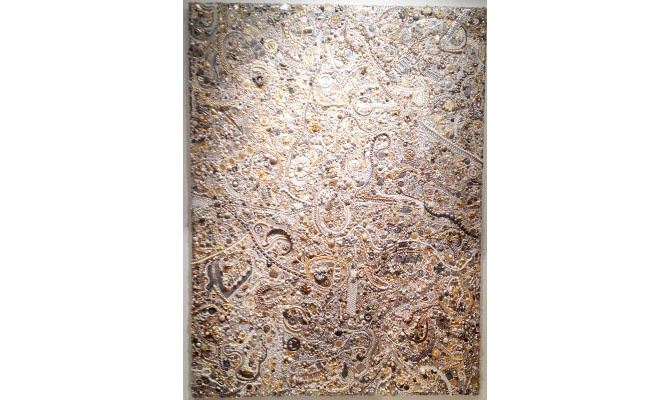 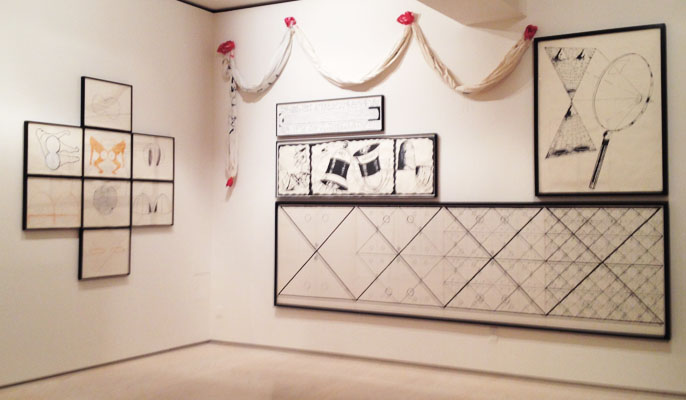 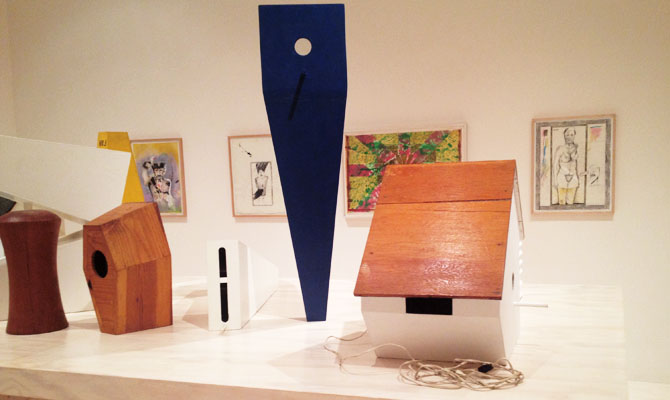 Mike Kelley, “Gothic Birdhouse” and other pieces from the graduate show at Cal Arts 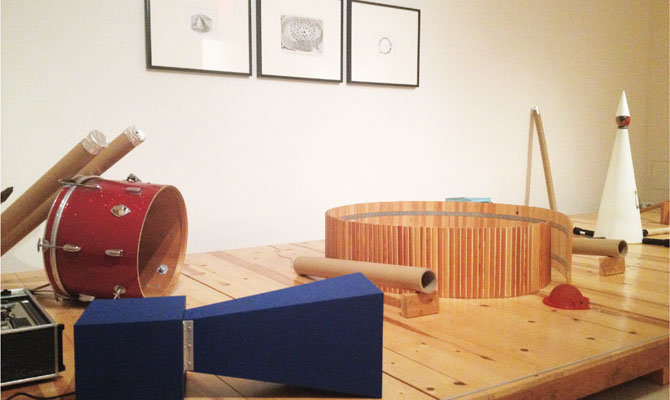 This winter New York museums seem to have many interesting retrospectives of contemporary artists, and two of the best are Mike Kelley at MoMA PS1 and Isa Genzken: Retrospective at MoMA. The recent suicide of Mike Kelley (1954 -2012) was shocking to many people in the art world as he seemed to be at the apex of an art star career. The exhibition at at PS1 covers his entire career including early works from his MFA thesis shows at Cal Arts (California Institute of the Arts) in Los Angeles County (Photo 2) and gives viewers very good understanding of the oeuvre of Kelley, whose work encompasses performance, sculpture, painting, video, etc. all based on the esthetic of craft. The setting, a vast former public school turned into a contemporary art space is also perfect as Kelley was deeply concerned about the formative years spent in American public schools. What comes through clear after examining all the work spanning more than three decades is his commitment to skewer the myth of innocence and the sanctity of childhood, utopian fantasy of home, egalitarian social structure, and the dominance of masculinity in America through black humor, pop culture and resistance to authority (like his fellow Southern Californian Paul McCarthy). What stands out (unfortunately in a negative way) against all this cohesive body of work is Kelley’s latest work, “Day Is Done” (1995) that he showed at Gagosian Gallery. Suddenly his esthetic of craft is lost and the work looks overly polished and expensive. This is the point where I feel the weight of Kelley’s suicide the most. After three decades of skewering and mocking the dominant culture (including the myth of American success), Kelley was now succumbing to the bombacity of it all and I can understand how he had difficulty in reconciling the commercial success and his despair and criticism with the process of American myth making.

Over at the main building of MoMA, I was happy to find another good career survey of a multimedia artist, this time a German sculptor Isa Genzken. Genzken’s retrospective is more moderately scaled, yet her brash, colorful and chaotic assemblage sculptures bring a breath of fresh air to tourists chocked floors of MoMA. My first impression at the retrospective was, “Wow, this is kind of New Museum-like show, not MoMA-like show (i.e., not Margritte or Tim Burton retrospective).” I also kept wondering what kind of dialog could have been gleaned between these two artists from different continents if Kelley’s retrospective was housed at MoMA. Even with different gender, nationality and cultural focus, there is an esthetic common thread. Genzken is clearly an elder stateswoman of “assembled from trash” school of sculptors and she was prominently feature at “Unmonumental,” the inaugural exhibition at New Museum. Yet it was good to see her career trajectory and clear influences to many younger generation of artists (such as many shown at “Unmonumental”). Gezken adapts many styles including Ab Ex, Pop and Minimalism, but also makes these styles her own by imbuing emotional warmth and sentimentality (in the best sense) into her work that resonates unlike many assemblage sculptures that often seem just clever and impersonal. I particularly loved series of paintings from the late 1980s (Basic Research, 1989: Photo18), which was made by rolling paint on her studio floor and rubbing canvas directly on to the floor. The resulting image is a kind of a hybrid of monochrome painting and monotype print that also expresses the ideas of Abstract Expressionism. Beyond these conceptual amalgamations, I just enjoyed the quiet beauty of these paintings.