Marking the Time at The Clock by Christian Marclay 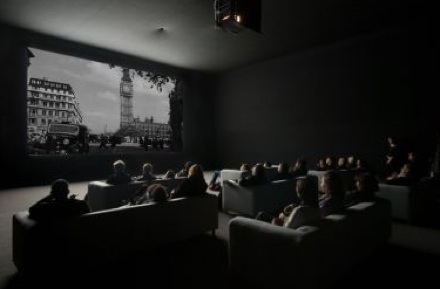 By now most people in the art world have heard of Christian Marclay’s 24 hour video installation, The Clock. First shown in New York at Paula Cooper Gallery in January, the demand for viewing was so high that some people complained/bragged about waiting for 3 hours out in the cold to get in. Twice I went to see it, but left after waiting about an hour and observing that the line was not moving at all. Last week, I had another chance to view this much lauded installation (“perhaps the best movie ever made,” according to Zadie Smith) at David Rubenstein Atrium at Lincoln Center. This time around, the weather much nicer, and the line much more organized (ever helpful Lincoln Center staff posts estimated wait time at the end of the line: “The wait is 1 hour and 30 minutes at this point.”)

Waiting to get in to see The Clock is an ironic experience as marking time is one of the essential elements of the movie. Yet while waiting in line you are somewhat overwhelmed with amorphousness and the tedium of the passage of time, whereas once inside,  you are thrilled by the progress of time even when you are reminded every minute of it.  First thing you notice as you plunge into the non-narrative narrative of this movie is that marking every minute of the day makes the flow of the time more liberating as we become intensely aware of the artificiality of the time. Second thing noticed is that how much time is used to create narrative tensions in the movies. Thirdly, I realized that Big Ben might be the indisputable star of this movie, showing up more than half a dozen time during my viewing time of 2 1/2 hours.

I watched The Clock from 10:30am to 1:05pm (slightly longer than the average an hour viewing time), finally succumbing to hunger and cold, even though I wanted to stay much longer (air conditioning is very efficient at Rubenstein Atrium and I suggest taking a warm sweater with you). At this time of the day, at least in our cinematic landscape, the productive class are mostly criminals robbing banks, waiting for ransoms to be paid, spying on others, while other ordinary citizens seem to be just getting up from the previous night’s adventures alone or together with their partners in misadventure. Although The Clock pays heed to every minute of the day, not every minute or hour is given the same weight. There is an artificial rise in tension before almost every hour, and an eventual flagging afterward. The lead-up to the noon, hence, approaches breathless crescendo: Lola running in Berlin, Leonardo DiCaprio jumping onto the Titanic, anxious faces watching the clock in High Noon.

The Clock is a montage film clips – well-known or obscure, American or foreign – with clocks for every minute of 24 hours. Marclay collaged these clips not just according to the time marker, but also some kind of narrative mirroring so that a scene of David Strathairn delivering the news as Edward Murrow (in Good Night, Good Luck) slides into the one of Dustin Hoffman as Tootsie watching television. To create a continuity and narrative momentum, Marclay bleeds one sound track to the next. The most fascinating aspects of the viewing for me was how my expectations of cinematic narratives were continuously thwarted and rewarded at the same time. Of course, there are no overarching narratives in this process, but by co-opting and subverting cinematic tropes (time, after all, is one of the most crucial elements in creating narrative tensions), Marclay creates continuous tension that is addictive. So what in theory sounds like the most boring cinematic experience turns out to be the most addictive one. Watching The Clock is also an intensely visual experience as you become more aware of the visual tropes unmoored from the narratives. In this process, The Clock is perhaps the most post-modern film ever made.