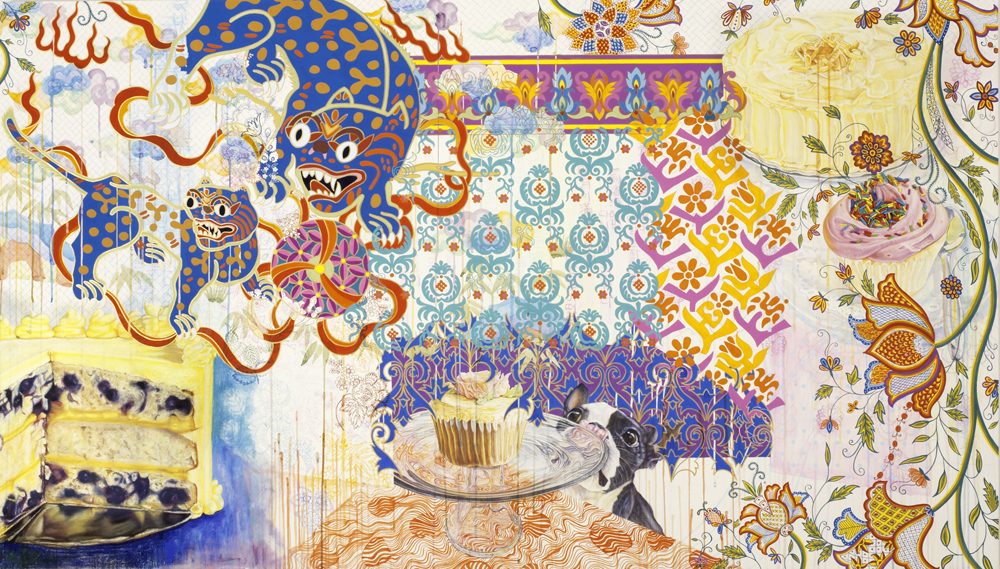 I will be showing a few pieces of my work at this summer exhibition in Chelsea.  Please come and see the work and let me know what you think.

This exhibition brings together many of the originators and early participants in the Pattern and Decoration Movement (P&D) of the 1970’s and 1980’s including Mary Grigoriadis, Joyce Kozloff, Robert Kushner, Pat Lasch, Miriam Schapiro, Robert Zakanitch and Barbara Zucker. Also included in Visual Feast are artists whose work has been associated with exuberance and sumptuousness on a grand scale (Judy Pfaff), those who manipulate surface decoration to a political purpose (Susanne Slavick), personal or symbolic import (Caroline Maher and Molly Stinchfield), or address mathematical or architectural concepts through ornamentation (Susan Happersett and Charles Koegel). Like her predecessors, Kira Nam Greene employs designs that are culturally specific in order to provide content and meaning to lush overlays of pattern. As in the first years of the movement, the artists in this exhibition use P&D for a variety of purposes – as John Perreault wrote for his formativePattern Painting exhibit of 1977 – “from formal to feminist.”

Although this is not a definitive P&D exhibition,Visual Feast seeks to highlight the movement’s significant contributions not only in painting, but also public art, performance and sculpture.  The inclusion of a number of more recent works serves to emphasize that despite P&D’s short-lived moment in the sun, the reverberations are almost endless. While the pioneers of P&D may not have directly influenced the entire host of contemporary artists who make use of architectural detail, repeating designs, vernacular forms, fabric and fiber, or non-Western sources, the permissions they offered have had a successful trickle-down effect.

The exhibition title, borrowed from Robert Kushner, is also a reminder that we owe the P&D movement a note of thanks for recuperating an appreciation of decorative beauty as a positive value. At the same time,this particular feast is made rich, in part, by Greene’s delicately detailed cakes, Grigoriadis’s vivid, almost edible palette of colors, Kushner’s phallic fruits in fashion and Lasch’s deadly paint-through-pastry-tube towers, offering a playful entry into a moment, movement and set of ideas that still feels ultimately satisfying to those hungry for visual splendor.