Arroz con pollo with a twist 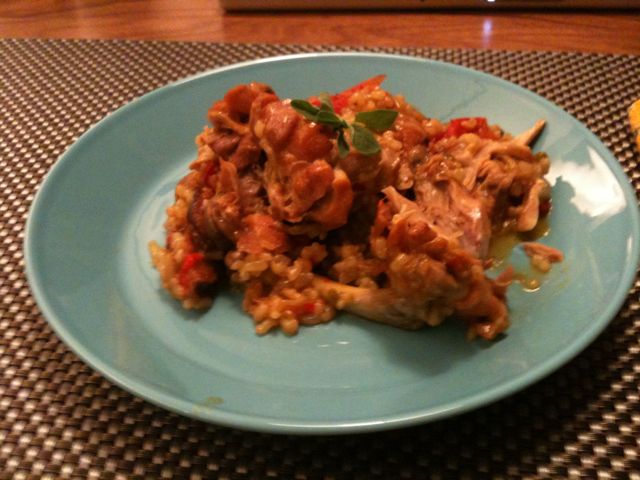 Arroz con pollo with a twist

I love any kind of rice dishes (okay, I am a Korean, so that goes without saying), and I love any version of Arroz con pollo or what I call Mexican paella. 🙂

I wanted to make a version of this dish with the brown rice since I also love the nuttiness of the brown rice, too.  The problem with the brown rice is that it always takes three times longer to cook than the white rice.  Today, pressed for time (started cooking at 6pm and had to finish eating by 7:30pm), an inspiration struck me: pressure cooker!  My mom gave me the pressure cooker two years ago, and I probably used it twice since I am a little bit afraid of the hissing monster, and I am thrown off by the cooking time and the liquid amount required.  But in the spirit of the adventure, I ventured forth tonight.  The beginning of the recipe is the same as the conventional method of making Arroz con pollo.  Only at the end, when adding the liquid, the pressure cooker method kicks in.

So instead of cooking in the oven for 1 1/2 hours, the rice is ready in the pressure cooker in 20 minutes, and as an added bonus, the chicken was fork tender and falling off the bones.

This entry was posted in Recipes and tagged chicken, rice. Bookmark the permalink.