On Sunday, I went to see Paul McCarthy’s massive installation at the Park Avenue Armory. McCarthy has had a long career as a performance and installation artist, with his renown more prominent in California. This spring, however, McCarthy is having his moment in New York City. His gigantic inflated red balloon dog graced the entrance of Frieze in May (in an apparent finger in the eye for Jeff Koons, perhaps mocking Koons’ steel balloon dogs being full of hot air), and his gallery Hauser & Wirth is dedicating both uptown and the new gigantic Chelsea galleries to his work this spring until July. To top it off, Park Avenue Armory is hosting his latest video/installation extravaganza WS, 2013 from June 19 – August 4, 2013. I have seen his somewhat disappointing sculpture show, White Snow at Hauser & Wirth in May, consisting of gigantic wooden sculptures resembling bookends with Snow White figures. So when I paid $17 admission fee to see his latest video installation at Park Avenue Armory, I was a bit apprehensive that it was going to be a total commercial sellout to big money blue chip art world per usual (à la disappointing Jeff Koons shows at twin giants Zwirner & Gagosian in Chelsea).

Fortunately, WS far exceeds any expectations, whatever they might be. As you enter the exhibition, you are instantly overwhelmed with visual and aural excesses from the 4 channel, 7 hour video called The Feature, Armory Edit, which are projected wall to wall at the entrance and the far end of the hall. In the middle are two big installations: the ranch house where the interior scenes are filmed, and the massive enchanted forest with the same ranch house exterior with gigantic trees with trunks resembling chocolate sculptures. The long side walls are divided into little cubicles featuring 9 different video works (mostly single channel) that provide viewers somewhat of a back story to the main feature. In addition, there is another room outside the main hall with the video of an interview with the artist and critiques as well as Walt Paul Store, Deli Case, etc. 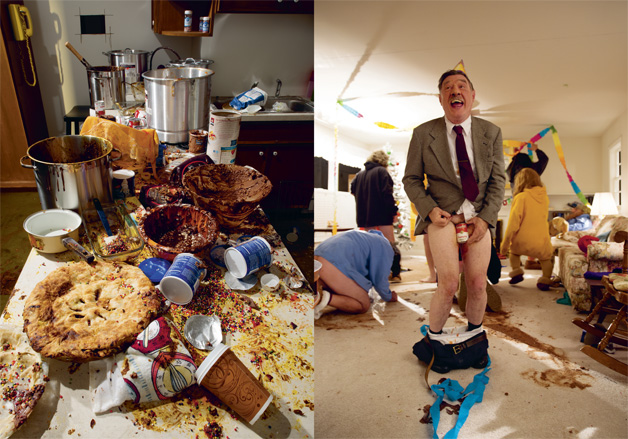 When I arrived at 5pm (thinking two hours until the closing time will be sufficient to view the exhibition, but to view every video, it would take a whole day), the artist, playing the character Walt Paul (an obvious reference to Walt Disney) was on all 4 billboard-size screens, fully naked in the midst of drunken sex orgy gone terribly wrong in a suburban ranch house. McCarthy, along with the late Mike Kelley, is one of the most American of the contemporary artists, who examines the psychology (both eros and id) of American males. In this regard, the Feature at the Armory feels like a culmination of McCarthy’s life-long work in performance, installation and film, providing critical view of America encompassing both the society in general and contemporary art practices. His focus has always been critiquing the American society and its hypocrisy and repression though the very thing that distorted it: the American pop culture, Disneyland, B movies, soap opera, consumerism, etc. The demented psychodrama on screens also owes its artistic debt to Joseph Beuys‘ performance art in the sense of gesamtkunstwerk, Freudian (id, Oedipal complex) and Jungian (archetypes) psychoanalyses and Viennese Actionists such as Otto Mühl, Günter Brus  and Hermann Nitsch. Only here, the most American of the substances of Hersheys Chocolate and ketchup replace blood and other bodily fluids, and primordial fears of Grimm fairy tales are played out by Snow Whites as sorority co-eds and seven dwarfs as fraternity brothers replete in UCLA  and Yale logo sweat shirts (the twin production engines of MFA graduates).

McCarthy brings other art historical references to this installation. The enchanted forest reminded me of Courbet’s paintings (especially l’Origine du Monde & La Source, where life and creative energy emanate with mysterious feminine power, feared by men). McCarthy also pays direct homage to Duchamp by acting out Duchamp’s installation Etant Donnés, while perhaps criticizing this patron saint of postmodernism of his closeted notion of eros. In another video titled Olympia, the characters White Snow and Walt Paul (played by McCarthy himself) play out demented Oedipal drama while McCarthy plays with Manet’s notion of voyeurism and modernism by displaying White Snow on a couch laid out naked like Olympia while her son Walt Paul carefully and cautiously watches her.

Despite (or maybe because) of the transgressive acts of sexual behaviors and violences on screen, it was almost impossible to take my eyes off the main screens to see the rest of the installation. It was hard to imagine 7 hours of this movie, and as I was watching I felt like being pulled down into some kind of thick primordial soup, weighted and weightless at the same time. I had to shake myself to view the rest of the installations. Yet instead of oppressive depression felt after viewing an ordinary pornography, I felt more compassion for the human condition. Oddly enough, I left the Armory more intellectually and emotionally stimulated than ever.