Alison came to visit us in New York for a blast of art viewing as well as Joao, whom I met in Lisbon last summer at an incredible sardine festival, was in New York before he made his way to New Orleans.  To celebrate, I hosted a Korean barbecue dinner, which was a first for Joao.

To duplicate the Korean restaurant experience, I put a little portable propane gas camping stove with a grill pan in the center of the table to grill the meat, which makes the dinner more entertaining and less effort for the hosts (guests make the food themselves, ingenious!).  Some of the usual Korean side dishes called Panchan (반찬) such as Kimchi, spinach salad and stuffed zucchini (photo on the right) supplemented the bulgoggi.  I wish I had a picture of Joao’s face when he tasted kimchi for the first time. 🙂  For those of you who are Korean food virgins, kimchi is a Korean national dish that is consumed with every meal, which is highly spiced pickled and fermented cabbage.  Essentially more flavorful, spicier and garlickier version of sauerkraut.  The zucchini is stuffed with the mixture of minced garlic, scallion, fermented shrimp paste (새우젗), pepper and sesame oil and steamed in a bamboo steamer.  Bulgoggi itself is an easy marinate preparation that should be made at least 4 hours before the meal.  Here is the recipe. Feeds an army. 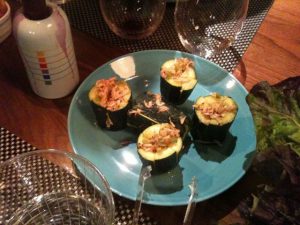 Combine all the ingredients together and mix really well.  Test the seasoning by cooking a piece of meat on a frying pan.  Adjust seasoning. Refrigerate for at least 2-3 hours.  At least 30 minutes before grilling the meat, take it out of the refrigerator.

Preheat the outdoor grill, indoor habachi, Korean grill pan or plain old frying pan until it is super, mega hot.  If using outdoor grill, use grill baskets, otherwise the meat will fall through the grill.  Grill to the desired doneness and eat it wrapped in lettuce leaves.  You can add kimchi and other panchan to this Korean style bbq taco. Enjoy.

This entry was posted in Recipes and tagged bbq, beef. Bookmark the permalink.