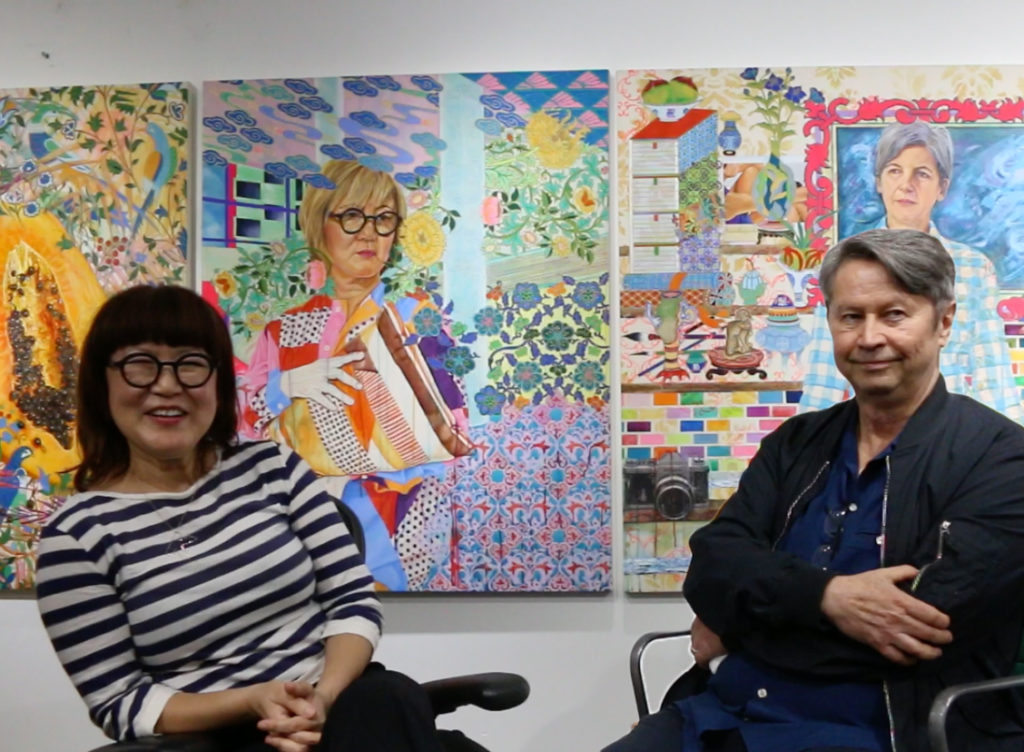 I was recently included in the AHL Foundation’s Archive for Korean Artists in America.  This is a great repository for stories and content about contemporary and historical working Korean Artists.  I was pleased that Paul Laster, freelance art critic (for publications such as Time Out New York, The Observer, Art Asia Pacific) and independent curator was selected to conduct the interview.  I have been reading his illuminating insightful essays and interviews for many years.  I have included a snippet of our conversation here.

Paul Laster: How do you describe your work?

Kira Nam Greene: I would describe my work as a combination of realist painting and abstraction with the use of patterns and decorations. My subject matter has changed, especially since last year with the election of Donald Trump [as the President of the United States] as I subsequently struggled with the political environment and what’s happening to society and culture in general. I was painting still lifes of food surrounded by abstract patterns until early 2017. Since then I have changed direction to produce figurative work – portraiture such as you see here in the studio now.

PL: How long had you been making still lifes?

KNG: Probably since about 2005 or 2006, so that’s three or four years out of graduate school. In school I was making purely figurative work focused on dealing with the female body and the male gaze that related to being an Asian-American or Korean-American in a mostly white society. After graduation, I was searching for new ways of thinking of the same ideas but expressing them in a different way and complicating the pictorial spaces, rather than doing the straightforward figurative work, which I started to feel was academic. I started combining abstract elements into my work.

PL: What role do you think your early life played in your choice of subject matter, particularly food?

KNG: Going back, I think there are two or three different strands that came together to make me choose food as my main subject matter. One is the fact that it is [a subject that is] accessible to anyone. I’m a Korean living in New York, and even though New York is a very cosmopolitan city, I miss Korean food. I started thinking about how it is fundamental to the immigrant experience. One of the key things people miss isn’t fancy food, but street food and the kind of food you can’t regularly buy at restaurants. The second was the thinking of food as a metaphor for the body – Jesus Christ as the body in the sacraments or equating the woman’s body to fruits or vegetables, which have been a tradition in both the East and the West. Since I had been dealing with the subject of sexuality and the female body in my previous work, I felt it was a metaphorical and more layered approach to thinking about the female body than its direct representation, which has been done for so long. Third, on a personal level I enjoy cooking and eating, as you know. I wanted to incorporate my daily personal interest into my practice, too. I think the artist needs to think about that, not only the culture and socio-politics but also his/her personal interests. That’s how it started.

PL: How did your education influence what you do and how you do it?

KNG: I didn’t start as an artist. I was an academic. I came to the United States originally to do my PhD in political economy. I got my PhD and worked as a management consultant for a few years. Then I had an accident in 1999 and various life circumstances changed, which led to my making art. I always wanted to do it before, but I couldn’t – maybe because I did too well at school. If you’re academically successful, it is hard to get out of a mold living in Korea. One of the biggest experiences was moving to America and feeling the freedom of being able to choose and being able to have a second career. In Korea that is so much harder. There is always a prescribed ‘success’. In terms of education and experience, because of this I have a different kind of attitude to art, because I have an academic background.

This entry was posted in Interviews and tagged AHL Foundation, Korean Artists. Bookmark the permalink.