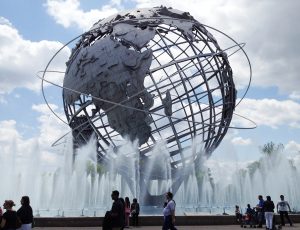 I attended Open Engagement Conference, a three day international conference on socially relevant art making on the weekend of May 17 and wrote a little review for Temporary Art Review. Here is a direct link to the article, but I thought I would post the article on here for my regular visitors.

Conceived as a graduate school project by the founder Jen Delos Reyes in 2007, Open Engagement Conference has grown in scope and ambition. This year’s Open Engagement (OE), a three-day international conference exploring various perspectives on socially engaged art making, highlighted the theme of Life/Work. The various sessions at the conference explored the social conditions in late capitalist economy such as labor, education, and food production in the context of being a socially responsible artist. Unlike many academic conferences, OE tries to incorporate its founding philosophy into the format itself and hosts many social gatherings, workshops and open platform presentations in addition to more traditional lectures and presentations. The workshops tried to address questions such as: What are the impacts of artists living and working in community? What is the work of art today? How has the idea of life’s work changed in the 21st century? These are obviously very big questionsthat a three-day conference can never fully answer, but the idealism and the enthusiasm of the attendees brought a palpable sense that some fundamental structural changes are possible even under recalcitrant institutions of late capitalism that undervalues social responsibility and justice. 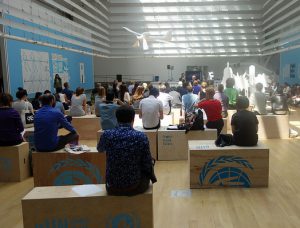 On Sunday, the final day of the conference, one of the most lively events was a Lunchtime Conversation Series titled “What’s Mine is Yours: Labor, Participation, and Generosity in Feminist Art/Life Practices,” hosted by Erica Thomas, an MFA student from Portland State University. She distributed several Life/Work and feminist related questions written on a card to the participants (who were, of course and unfortunately, all women) and asked them to choose one to discuss with a partner. The questions focused on the economic reality of being an artist and a woman: What does it mean to make a living? How do you interact with capitalism as a feminist? How does your gender identity affect your work/life? How do you value your labor?

The format that Thomas chose, of one-on-one interaction followed by a general discussion, was to engender intimacy generally lacking in professional networking sessions, and to encourage women (who may be socially pressured to discount their own worth) to see the value of their own work through mutual acknowledgement and support. According to Thomas, these small, socially engaged collaborations and conversations can lead to more democratic processes in larger institutions and ultimately more structural institutional changes without any radical reforms in personnel or bylaws. During the group discussion, the topic that most interested the participants was the relationship between making a living and making art. Most agreed that artist is the only profession where you do not define your career by what you earn, unlike a gentleman who spends most of his time playing golf yet defines himself as “lawyer,” for example. Under this financial reality, the attendants emphasized the need to pursue alternative ways of surviving under capitalism, including finding viable alternative financial skills, demanding just wages/price for your work, and alternative means of exchanges such as trades and swaps. Everyone participated in one such example, Opportunity Swapping, at the end of the session. Each participant provided some future opportunity (job leads, places to stay out of town, professional services such as Photoshop, grant writing, etc.) by writing down an offer and contact information on a card.

The most heated discussion, however, was reserved for the definition of feminism/feminist and the way that one can engage others who might not be interested or even against the idea of feminism. This session was interesting in the sense that it embodied the hope and the dilemma of socially engaged art in general: preaching to the choir. How does one expand the idea of feminism and social justice in general public and through entrenched capitalist institutions?

One of the Parallel Programming Life/Work presentations, “Artist in/as Institutions,” presented three different ways of institutional engagement by artists. Brett Hunter, a professor from Alfred University (located in the Village of Alfred, near Rochester in Western New York) presented a model where an artist as a citizen can impact changes in a community by directly engaging in civic and cultural institutions. His examples focused on small economically depressed communities with languishing civic and cultural institutions, in which engaged populations of artists and students revitalized community cultural centers that in turn revived derelict buildings and the neighborhood by emphasizing collaboration and resource sharing with other institutions. Gilly Karjevsky and Hila Cohen-Schneiderman, two Jerusalem based curators presented The City Artist: Artist in Residency Program in Municipal Departments, a subtly subversive initiative to bring changes in the most recalcitrant government institutions by inserting an individual artist in an almost hostile environment. The curators reported that the resident artists could open up interesting dialogues among different constituents in the city government and the citizens that were somehow hidden or tacitly forbidden by simply engaging in normal art practices under this unusual bureaucratic setting. The last presenters were Nina Sarnelle and Agnes Bolt of The Institute for New Feeling, an artist collective, which has formed an institution modeled after an existing commercial business (a wellness business like a spa) and provoke changes through humor and satire.

The most practical of the sessions was an Open A.I.R. Workshop titled “Introduction to Cultural and Community Organizing,” which dealt practical and strategic methodologies in the ways to build social movements and to advocate social justice through cultural work. In this workshop Cultural and Community Organizers Alexandra Garcia, Lucas Sanchez and NOCD (Naturally Occurring Cultural District Group) shared practical advice and strategies in small group discussion format. These three examples neatly distilled the underlying philosophies and principles of OE: excavating ways of impacting social changes in a small but significant way through uniquely structured conversations and collaborations. The challenge for the organizers and the conference participants alike still remains one of incorporating and maintaining these practices under an overwhelmingly hostile financial environment.