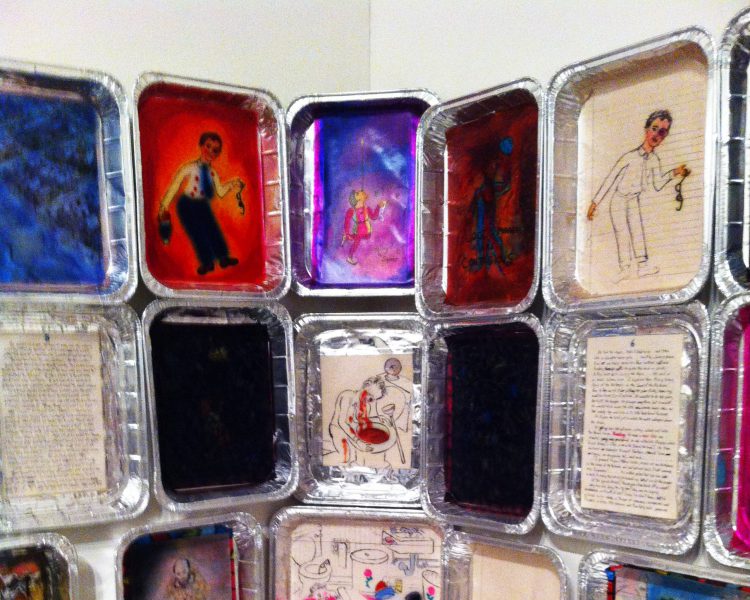 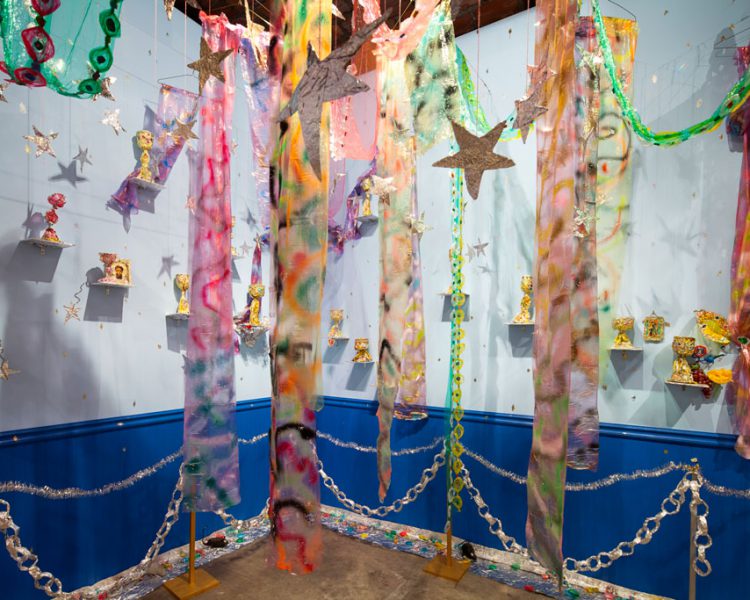 One of my old professors from SVA, Thomas Lanigan-Schmidt had a retrospective at MoMA PS1. Tommy, as everyone from school always calls him, makes luminous, devotional art out of trash: cling wraps, foil, tinsel, cellopane, glitter, candy wrappers and other household and dollar store detritus embracing kitsch and intentionally tacky. This retrospective is installed based on the sacred architectural layouts of medieval churches; a gigantic, shiny Byzantine altar piece made out candy wrappers, foils and holy icons (photo above) and each nooks of individual installations forming some kind of chapels along both sides of the aisles. (photo at the bottom). The sense of ecclesiastical euphoria is aided by accompanying five-minute audio track resembling incantations at a high Mass.

All these works from 1968 to 2005 almost always involves simulation of the iconography and opulence of the Roman Catholic Church made from the “junk” with glues, staples and tapes. Much of the work  is also interspersed with pieces of gay pornography with unabashed queer sexuality, which pushes the work into the territory of high camp as described in Susan Sontag‘s famous essay “Notes on Camp”. Shown at Holly Solomon Gallery along with many artists from the Pattern and Decoration Movement, Tommy’s work is also exuberant, sincere and joyful rebuke to somber intellectualism of Minimalism and formal abstractions.

Viewing the work among so many of soulless contemporary installation art also made from the refuse and junk (such as many of the works at New Museum’s Unmonumental or The Generational: Young Than Jesus), Tommy’s work is not only visually sumptuous and generous but also a moving tribute to art work as a life lived truly and fully with heart-felt convictions with spiritual expansiveness.